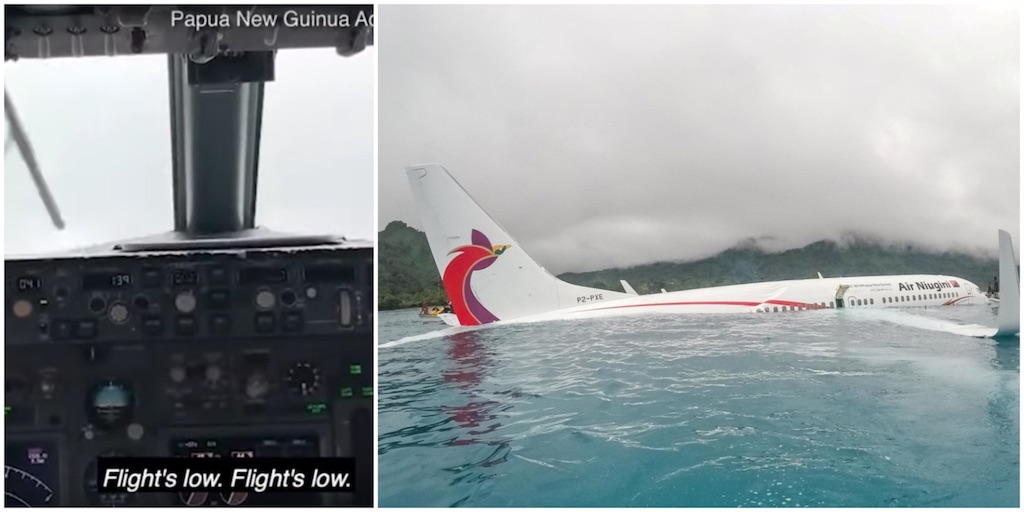 Footage from inside the cockpit of a plane that crashed into a lagoon in September shows the plane approaching the water and the moment of the crash.
One person was killed when the Boeing 737 crashed into a lagoon in the Federated States of Micronesia. Other passengers and crew members were rescued.
In a cellphone video taken by an engineer in the cockpit and described in a report on the crash released Thursday, the plane's warning system says it is too close to the ground while a pilot exclaims, "We're too low!"
The video stops shortly after the plane hits the water. The report said it was "an invaluable source of vital information" for investigators.
Visit Business Insider's homepage for more stories.
Terrifying footage from inside the cockpit of a Boeing 737 in the Federated States of Micronesia in September shows the plane heading toward the ground and the moment it crashes into a lagoon.

In the cellphone video, taken by an engineer sitting in the plane's jump seat and described in a report on the crash released Thursday, the pilots are seen using controls in the cockpit before the plane's warning system alerts them that it's too close to the ground.

"We're too low!" one pilot exclaims just before the plane hits the water. The video stops shortly after that.

The plane, a Boeing 737 belonging to Air Niugini, Papua New Guinea's national airline, was flying from Pohnpei to Chuuk, both in the Federated States of Micronesia, when it crashed in the Chuuk Lagoon near Chuuk International Airport, killing one person.

Investigators said the plane missed the runway by 1,500 feet (460 meters) in weather with poor visibility that required pilots to rely on their instruments. The plane eventually sank in about 98 feet (30 meters) of water.

Thirty-four passengers and 12 crew members were rescued by local boats and US Navy divers, though six passengers were "seriously injured," according to the final report on the crash, from Papua New Guinea's Accident Investigation Commission.

The body of the passenger who died was found three days after the crash. The report said pathologists concluded that he had not been wearing a seat belt and had received blunt-force trauma to his head.

The report said the pilots did not respond to warnings that the plane was too close to the ground and did not follow landing checklists.

« Space Wars: Military Satellites Will Be… A US Navy ship used a new drone-defense… »
プロフィール